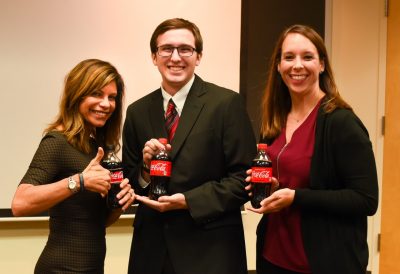 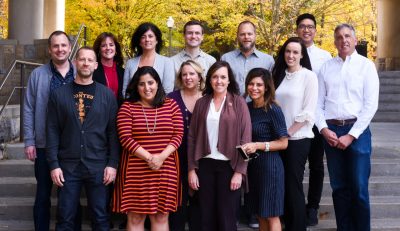 Coca-Cola and the Virginia Tech Pamplin College of Business’s Marketing Department teamed up again to make Season 3 of Barracuda Bowl one of the most exciting years yet. This year’s prompt was, “How can Coca-Cola leverage the power of gaming to reach teens and recruit the next generation of brand loyalists?” Out of dozens of applications, seven student teams were chosen to pitch their ideas to members of the Marketing Advisory Board as well as members of Coca-Cola’s corporate team.

The stakes were high–the winner would not only receive money to implement their campaign on Virginia Tech’s campus, but also an all-expense-paid trip to Coca-Cola’s Headquarters in Atlanta, Georgia where they will meet with the gaming team. The judges consisted of Angela Lorinchak and Jenn Hoker, MAD Presidents; Donna Wertalik, Associate Professor of Practice and Lead Advisory Liaison; and Tracy Brincefield, Schuyler Winter, and Shannon Wighington from Coca-Cola. Each judge was given a rubric to grade the individual pitches against, and the judges were impressed with what the students had to present.

“This is the third annual year of Barracuda Bowl and we have seen it elevated every single year– the presentations, the ideas, and the aspect of expanding marketing beyond traditional get better,” said Wertalik. “We’ve looked at gaming and students really critically considering this as a marketing component and how it can drive awareness, return on investment, as well as build a community on the Virginia Tech campus and beyond.”

“I’m so shocked, I’m very thankful for Coca-Cola for putting on this competition,” said Bittner. “I’ve worked so hard for this, so I’m very happy that it’s paying off and I’m going to get to do it. I’m a gamer, and I love gaming, and I want there to be a community for it.”

Coca-Cola is excited as well to see where this campaign will lead them, especially with building brand love, loyalty, and awareness with the next generation. Shannon Wighington, Marketing Assets Manager for Coca-Cola was impressed by the winning pitch.

“At Coca-Cola, we are thrilled to be partners with Virginia Tech,” said Wighington. “The Barracuda Bowl is always very exciting for us to be part of so to see people like James and the rest of the contestants come and present phenomenal ideas that are relevant to our target consumers is invaluable information. We’re really excited that James is our winner and we cannot wait to bring his program to life.”

Bittner, along with the help of Coca-Cola and VT PRISM, will oversee the execution of his campaign in Spring 2018.