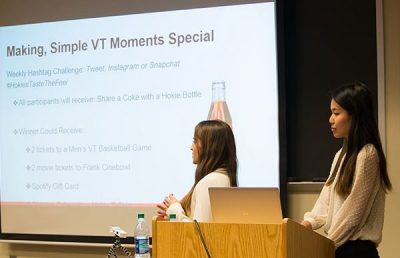 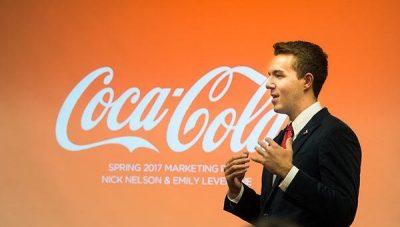 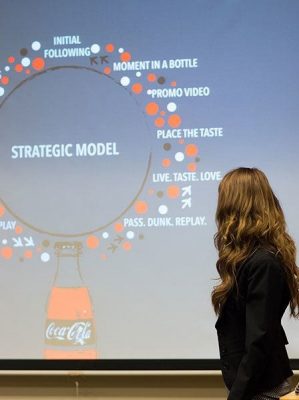 The marketing department and Coca-Cola teamed up to host Season 2 of the Barracuda Bowl at Virginia Tech in November. The student competition challenged undergraduate marketing majors to create a social media activation campaign on the Virginia Tech campus to build brand love for Coca-Cola. Students were given a budget by Coca-Cola and a limit of five minutes to present their campaign.

I continue to be impressed by the creativity and enthusiasm displayed by the students. Their perspective is refreshing and will elevate the field as they graduate.” – Jenn Hoker, Senior Vice-President of Edelman Intelligence and Co-President of the VT Marketing Industry Mentoring Board.

Nine student teams presented their campaigns to the VT Marketing Industry Mentoring Board and Aimee Cox, Coca-Cola’s Director of Sponsorship for Colleges and Universities. Their campaigns were judged on concept, execution, and creativity – as well as logistic factors such as budget and timeliness. Students presented a wide variety of concepts, from event-based to digital-only campaigns. The activations focused on several different social media platforms, from Instagram’s video app “Boomerang” to the music video app “Fusic.”

Donna Wertalik, Director of Marketing for Pamplin College of Business, noted the excitement of the faculty and board members who were able to watch the pitches. “Being able to see students have their ideas come to life and pull in concepts they learned in class was extraordinary for all of us,” she said.

Seniors Kasey Casella and Kasey Chou won the competition. Their campaign, titled “Hokies Taste the Feel” focused on engaging the Virginia Tech community by tying together Hokie experiences to experiences that should be enjoyed with a Coke. Casella and Chou will oversee the execution of their campaign in the Spring 2017 semester.

The dedication, motivation and determination of the students continue to impress all of the board. I look forward to seeing their successes in the years to come.  The Marketing Department is doing a fantastic job in preparing them for the future.” — Angela Lorinchak, President of Jackson Adept Research and Co-President of the VT Marketing Industry Board.